It's all about the laundry!

From the New York Times

To Fight Global Warming, Some Hang a Clothesline 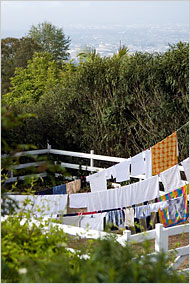 ON THE LINE To reduce energy bills and carbon emissions, the author secretly hung a clothesline in her backyard. Like many homeowners’ associations, hers restricts their use.
Sara Remington for The New York Times

AS a child, I helped my mother hang laundry in our backyard in Tamaqua, Pa., a small coal mining town. My job was handing up the clothespins. When everything was dry, I helped her fold the sheets in a series of moves that resembled ballroom dancing.

The clothes and linens always smelled so fresh. Everything about the laundry was fun. My brother and I played hide-and-seek in the rows of billowing white sheets.

I remember this as I’m studying energy-saving tips from Al Gore, who says that when you have time, you should use a clothesline to dry your clothes instead of the dryer.

A clothesline. It strikes me that I haven’t seen one since 1991, when I moved to Rolling Hills, Calif., a gated community about an hour south of Los Angeles. There are rolling hills, ranch houses, sweeping views of the ocean and rocky cliffs — plenty of room — but not a single visible clothesline.

I decide to rig a clothesline as an experiment. My mother died many years ago and the idea of hanging laundry with my own daughter, Isabel, who is 13 and always busy at the computer, is oddly appealing. I’m also hoping to use less energy and to reduce our monthly electric bills which hit the absurdly high level of $1,120 last summer.

That simple decision to hang a clothesline, however, catapults me into the laundry underground. Clotheslines are banned or restricted by many of the roughly 300,000 homeowners’ associations that set rules for some 60 million people. When I called to ask, our Rolling Hills Community Association told me that my laundry had to be completely hidden in an enclosure approved by its board of directors.

I briefly considered hanging our laundry in the front yard, just to see what would happen, but my family vetoed this idea. Instead, I settled on stringing two lines in a corner of the backyard, a spot not visible to neighbors or officials. I’m supposed to submit a site plan of our property and a photograph of my laundry enclosure. But I don’t have an enclosure, unless the hedge qualifies.

Looking for fellow clothesline fans, I came across the Web site of Alexander Lee, a lawyer and 32-year-old clothesline activist in Concord, N.H. In 1995 Mr. Lee founded Project Laundry List, a nonprofit organization, as a way to champion “the right to dry.” His Web site, laundrylist.org, is an encyclopedia on the energy advantages of hanging laundry.

Mr. Lee sponsors an annual National Hanging Out Day on April 19. He plans to string a clothesline at the State House in Concord, N.H., this Saturday as part of a Step It Up 2007 rally on climate change, where he will hang T-shirts and sheets with the slogan “Hang Your Pants. Stop the Plants.”

Inspired, I moved forward with my project without submitting the site plan and photograph for approval. My daughter agreed to help me hang the first load.

“It looks beautiful,” she said when we stepped back. “It looks like we care about the earth.”

The experiment was off to a good start. The first load dried in less than three hours. The clothes smelled like fresh air and wind. As we took them down, the birds were chirping and the sun was shining.

But there was a downside. “The towels are like sandpaper,” said my husband, Dan, after stepping out of the shower.

Not only that. Heading outside to the clothesline and hanging each load takes about 7 minutes — 6 minutes and 30 seconds longer than it takes to stuff everything into the dryer.

As the months rolled by, no one from the community association complained. Of course, since the clotheslines are in a lowered corner of the backyard surrounded by hedges, they cannot be seen from the street, the neighbors’ houses or even our own house. But the rope lines started to sag, allowing the sheets and heavy wet towels to drag in the dirt. The wooden clothespins soon became weathered and fell apart.

Meanwhile, my daughter lost interest after the first load, dashing my hope of recreating the happy times I spent hanging clothes with my own mother.

I briefly gave up — the dryer was so much easier — but then tried again. I bought stronger lines, plastic instead of rope, and switched to plastic clothespins. I also learned that tossing the clothes in the dryer for just a few minutes after they have dried on the line makes them softer.

Everyone now seems happy enough with the fresh smelling laundry, which is just slightly stiff. Of course, I still haven’t asked our local board of directors for approval. If they object, I could be forced to take my laundry down or build an enclosure, an inconvenient confrontation I’m simply avoiding. In the meantime, our electric bill has dropped to $576 in March from its high last summer, reflecting a series of efforts to cut energy. (That’s still too high, so we’re about to try fluorescent bulbs.)

There were more than 88 million dryers in the country in 2005, the latest count, according to the Association of Home Appliance Manufacturers. If all Americans line-dried for just half a year, it would save 3.3% of the country’s total residential output of carbon dioxide, experts say. 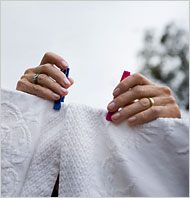 “It’s a huge waste of energy to tumble dry your clothes,” said Tom Arnold, chief environmental officer of TerraPass, a San Francisco company that sells carbon offsets, which aim to reduce greenhouse gases to compensate for one’s activities. “It’s one of the simplest things to do to help with global warming.”

The laundry underground is a mixed group. It includes the frugal, people without dryers, and people from countries where hanging laundry is part of the culture. Many people hang a few delicate items. Tim Eames, a British designer who lives in Los Angeles, does not own a dryer. “The thought of getting a machine to do something as simple as drying my laundry is totally inconceivable,” he said.

For those in colder climates, going without a dryer can be a challenge. Tom Stokes, a global warming activist in Stockbridge, Mass., managed to fit six clotheslines in a large downstairs bathroom, and he now hangs all of his laundry there in the winter. “It’s relatively easy in the summer. It takes more determination to string up a line and hang laundry year round,” he says.

Indeed, Annalisa Parent, a photographer who grew up in New Hampshire, said that when she was a child, her family hung all their laundry outside, even in the snow. Her father, an engineer, built a one-of-a-kind clothesline with an arched roof above it. She recalls standing her frozen jeans on the furnace to thaw them before school and wishing that her family could be like the families with dryers.

Now, at 32, she still doesn’t own a dryer. She hangs all of her laundry inside her town house in South Burlington, Vt. Ms. Parent says she was inspired to see “the beauty in a clothesline” by Mr. Lee, a friend from college. She has taken more than 500 photographs of clotheslines and her work, featured on his Web site, shows clotheslines by the sea, clotheslines in Romania and even close-ups of clothespins.

In Hollywood movies, however, clotheslines often appear in scenes depicting dire poverty. Jennifer Williams, a set decorator, says she hung clotheslines to help convey that in the films “Angela’s Ashes,” “Children of Men” and “Pearl Harbor.”

That image could limit the comeback of the clothesline. “People see laundry as an ugly flag of poverty,” said Mr. Lee. “It’s a reminder to some people of where they grew up.” For me, that was Tamaqua, Pa., where my father worked for a company that made explosives for the mines. Clotheslines are still popular in Tamaqua, where the average home price is $64,400. Linda Yulanavage, head of the local Chamber of Commerce, says more than half of the town’s 11,000 residents use clotheslines because they like the smell of fresh air in their laundry and because it saves energy. “People see it as a normal, everyday thing to see clothes hanging on the line,” she says. “It gives a homey, close neighborhood feeling.”

I completely agree, although I seem to have the only clothesline in Rolling Hills. Maybe others will join. Meanwhile, my carbon footprint is shrinking and our clothes smell like the great outdoors.

Back to the laundry page